Brazil has surpassed 30 million people infected with the new coronavirus since the beginning of the pandemic, in March 2020. In the last 24 hours, 13,361 positive diagnoses were confirmed for covid-19. As a result, the total number of accumulated cases reached 30,012,798. On Sunday (03/04), the total number of accumulated cases computed by the secretariats and the Ministry of Health was 29,999,437.

Follow-up – The number of cases in follow-up is at 518 thousand. The term is used for cases reported in the last 14 days that were neither discharged nor progressed to death.

deaths – The total number of deaths recorded in the country since the beginning of the pandemic reached 660,312. In the last 24 hours, 165 deaths were recorded. As of Sunday, the data system counted 660,147.

Investigation – There are still 3,085 deaths under investigation, when the patient died, but the cause of covid-19 still requires further tests and procedures.

daily balance – The data are in the daily balance sheet of the Ministry of Health, released this Monday (04/04). It consolidates the information sent by municipal and state health departments on cases and deaths associated with covid-19.

Numbers – The numbers are generally lower on Sundays, Mondays and the days following holidays due to the reduction of teams to feed the data. On Tuesdays and two days after holidays, there are usually more daily records due to the accumulation of data. 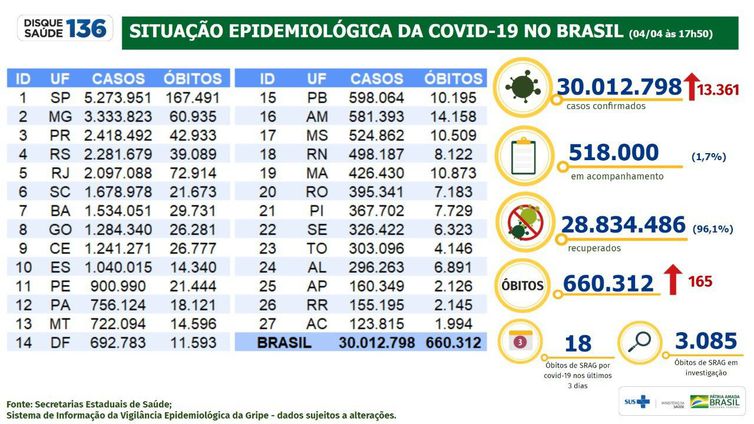