Cooperativism was one of the sectors that stimulated the growth of Santa Catarina’s economy in 2021. Last year, the 255 cooperatives that operate in different areas had gross operating revenue of around R$ 67.9 billion.

This is equivalent to a growth of 37.32%, that is, more than eight times the expansion of the Brazilian GDP (Gross Domestic Product) last year (4.6%).

The survey is from OCESC (Organization of Cooperatives of the State of Santa Catarina) and was announced by President Luiz Vicente Suzin and superintendent Neivo Luiz Panho, at a press conference this Tuesday (5th).

The data show that cooperatives from all sectors contributed to Santa Catarina’s development in 2021. Agribusiness, once again, was the locomotive in the generation of jobs, income and production of wealth and contributed with 72% of the global revenues of the system.

Another 13 work cooperatives, production of goods and services earned R$ 27.6 million, according to the OCESC balance sheet. Shareholders’ equity, in the group of cooperatives, grew 19.15% and reached R$ 23.9 billion.

The tax burden did not spare the cooperatives. In 2021, they collected BRL 3.4 billion from the public coffers in taxes on gross revenue, an increase of 26.5% over the previous year. The evolution of the generation of payroll contributions was 28% in 2021, reaching R$ 1.1 billion.

“Cooperativism in Santa Catarina has been preparing for growth for many years. The agro-industries were prepared. The field was prepared. Everything that was produced with quality was sold. The market flowed very well. We attribute to this the growth we had in 2021”, said the president of OCESC, Luiz Vicente Suzin.

Superintendent Neivo Luiz Panho stated that the State currently has a group of highly qualified leaders who have been constantly preparing their cooperatives to compete in the market.

“The pandemic was one of the obstacles that [os dirigentes] they were prepared to go through and, in fact, it can be seen from the numbers, that they succeeded and even emerged stronger from the crisis. We hope that they will continue to invest in managing people, processes and products to remain competitive in the market”, projected Pinho.

SC is the most cooperative state in Brazil

Another highlight of the balance sheet concerns the expansion of the number of members – cooperative members – which grew 14.97% in 2021, with the entry of 454,084 more people. Altogether, the cooperatives now bring together 3.4 million people from Santa Catarina.

This means that more than half of the population is linked to cooperatives, which makes Santa Catarina the most cooperative state in Brazil.

“We attribute this to the work that cooperatives have been doing over these 50 years or more that we have had cooperativism in Santa Catarina and to the trust that members have been acquiring in their cooperative”, evaluated the president of OCESC.

The ones that most attracted members were credit unions, which currently have 2.6 million members; infrastructure companies that work in electricity distribution (400,346 people); consumption (326,516) and agricultural (79,698). 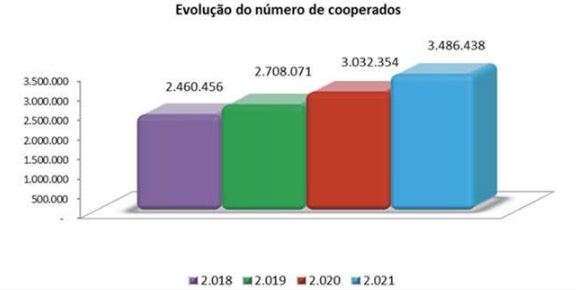 The OCESC president emphasized that Santa Catarina cooperatives made an essential contribution to the recovery of the economy in 2021.

According to him, the year was difficult due to the fight against the pandemic, but the cooperatives did not stop operating – whether agricultural, credit, transport, health, consumption, infrastructure, etc.

Some factors impacted competitiveness and profit margins, such as the scarcity of many industrial items, the appreciation of the barrel of oil and the water crisis (making fuel and electricity more expensive), the lack of containers, the reduction of maritime lines, the devaluation of the real, in addition to the explosive increase in the price of inputs, especially corn and soybeans.

Luiz Suzin predicts that the participation of cooperatives in agribusiness exports will continue to be significant, accounting for more than 70% of Santa Catarina’s sales abroad, due to the presence of cooperatives in the grain, swine and poultry production chains.

War in Ukraine could impact growth

Despite the positive scenario, the expectation of growth of cooperativism in Santa Catarina in 2022 is lower when compared to last year.

The war between Russia and Ukraine caused a partial stoppage of the market, which, according to the OCESC, is not flowing in the same way as in 2021. The war directly affects the price of inputs, especially fertilizers, which depend on Ukraine .

“The issue of the cost of fertilizers will affect a lot, because our rural producer is very insecure. Santa Catarina is a small state, but we depend a lot on agribusiness and everything that comes from the countryside”, said Suzin.

According to the president, the costs of some fertilizers have risen by more than 50%. “It doesn’t pay to plant the new crop. The war affected our entire economy. There is a great lack of definition and the agro was in a very complicated situation”, he adds.

The drought that Santa Catarina has been facing for a few months has also caused damage to farmers, especially corn.

According to the president of OCESC, Santa Catarina produced almost 7 million tons of corn. This year, production may not reach 3 million tons. Therefore, SC will have to export from other states or from Paraguay.