The singer Anitta seems not to have liked the way the portal G1, from Grupo Globo, reported her controversial sentence, which was published in the American magazine Nylon. After seeing the call for the report, on a social network, the artist decided to respond to the portal.

– The singer stated that “in Brazil, everyone wants to have fun and have sex”. What you want? – says the G1 tweet before the link to the article about Anitta’s statement.

The publication yielded ten tweets from the singer. She said she doesn’t regret what she said and explained that her phrase “has nothing to do with the connotation that was put” on Nylon.

Also according to Anitta, the American magazine will remove the controversial phrase. As for G1, the artist said that “it is not today” that there are articles “with a little hateful background” against her.

– Hi, kittens. I’ll answer you guys just because my fans have been begging for closure for a long time and I’m a mere employee of my fandom. So let’s go. I already explained here on Twitter what happened. I didn’t apologize because I don’t regret what I said. I received the entire interview and when I have permission I will post the excerpt to prove that my sentence had a completely plausible context, which has nothing to do with the connotation that was placed on this cover. The magazine has already apologized and is removing it. As for you, at the request of my fans, I will say. It’s not today that we pick up the materials with a little hate background. Like when they said To involve it was a ball on the post shortly after the release. And then, after To involve was number 1 you did the article saying that in English I still have a big flop. You have every right to write any shit about me because I’m f****** and walking for your opinion. But the voice of my fans is the voice of God and I decided to give them this little gift to give them the closure they’ve been waiting for – he declared.

Anitta continued, reinforcing that she never gave “a damn” to what the G1 writes about her.

– Thank God, I never gave a damn what you say. Otherwise I would have given up a long time ago thinking I failed, when in fact success is the result of work, time and persistence. We got there. And on the matter: I’m not going to let anyone reduce all my struggle for my country, for funk, for culture, for politics to ONE sentence that was put on a cover out of context just to get attention and click. My career is 12 years of pure giving. 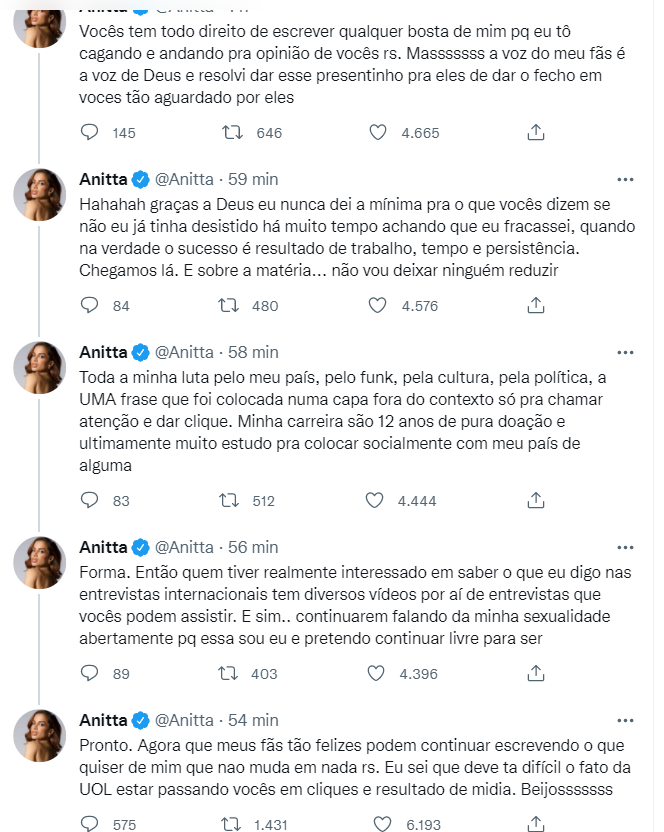 Follow us on our networks!
receive news
on your cell phone!

If you found an error in this text, please fill in the fields below. Your message and the page link will be automatically sent to the Pleno.News newsroom, which will check the information.

The author of the message, not Pleno.News, is responsible for the comment.